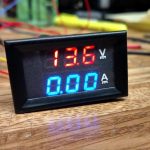 I was cruising a web site and found this little meter for the amazing price of only $4.20.  Such a deal, I thought.  But was it?  Maybe, depending on your application.

The meter reads 0-99 volts DC, and 0-10 amps DC and could be very handy if it was not for one small quirk.   The sample for amperage is taken from the Negative side of the meter. 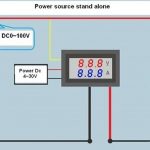 This may, or may not be a problem in your application, however it does require you to think about wire size, especially when working with a DC device drawing 10 amperes, DC.

The meter also does not have a fast sample rate, so use on something like a Yaesu FT-857D in the single sideband or CW mode would not be too helpful.

The meter seems to have about 350 mS refresh, and to be honest I was awful tempted to use a diode in place of the yellow lead and direct DC to a capacitor to stabilize the reading.  That would, however, cause some errors in the readings.  But maybe .1 of an amp or volt is not concerning to you.

The negative (ground) amperage measurement does rule it out for applications such as automotive, truck gear, etc.  I imagine with some MacGyvering you could put it into a project box for a bench power supply, or just to monitor a power supply output.  Another application could be a monitor on a solar or wind charging system, as long as 20mA doesn’t bother you when calculating losses.

The seller has these on sale at Aliexpress for only $1.88 each, and sometimes as cheap as $1.09.  So maybe it’s not entirely a bad deal.   They also have a voltmeter only in the same package. 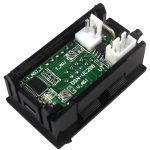 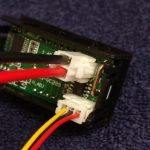 I’m presently employed as Director of Engineering for Block Communications, Inc., and I’m Vice President and Chief Operator for the a group of television stations in Lima, Ohio. On the amateur radio side I’m the trustee for the KT8APR repeaters on 53.630, & 145.370. These repeaters are analog, IRLP. I was the long time editor of the DX Audio Service, a non-profit radio magazine on audio cassette devoted to the medium wave DX hobby. The magazine ran from April 1985 till the National Radio Club shut it down in April 2015, I’m a member of B.P.O.E. #54, Eagles #370, past Salvation Army board of directors, past member of the Lima Host Lions Club where I served as President, VP, and on the board of directors. I hold the Melvin Jones Award, one of Lions Club top honors. In my nearly 50 plus year broadcast career I’ve worked at recording studios, radio, and television stations. One of my other hobbies is collecting “oldies” from the years 1955 to 1990 that charted in the radio industry in the Whitburn/Billboard charts for Rock and C&W. I have my own automation system & Part 15 radio station where I can listen to “good” music. I also restore old recordings of radio jingles, airchecks, and production music from tape and records. Another hobby is designing circuits and home-brewing equipment such as audio processors, tube compressors, switcher & control systems, audio distribution amplifiers, and audio mixers. Originally from Toledo, Ohio, my ham radio call sign, W8HDU, was granted via the vanity callsign program, and was my grandfather’s call. He worked at Western Union during the days and at night he operated on 80 meters from his home in Toledo using a home brew transmitter and receiver, working the CW mode.
View all posts by Frederick Vobbe →
This entry was posted in DIY, Product Reviews. Bookmark the permalink.
WP2Social Auto Publish Powered By : XYZScripts.com