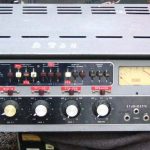 Gates Studioette from the Ross Revenge

Today I found a reference to the Gates Studioette console.  Remember them?  This console resided in the pirate ship Ross Revenge, “The Boat That Rocked”.  If you’re not familiar with the history its well worth an hour of reading!   Radio Caroline was an amazing station.

The console was typical of that era.  Tubes, step faders, but the interesting part was the construction.  Note how the chassis was made, the number of brakes made in the metal.  Knobs which you can actually handle.  Then there is the switching on the front as well as the escutcheon plates detailing the function.  Those, by the way, are steel and silk screen.

Today you don’t see that craftsmanship.  Recently I had to look for a console for work, and I was dogged by the fact every darn one of them is either a computer, or a production/stage mixer type of console.   OK, they look cool and futuristic, but they can’t be fixed at the component level, (you’re beholding to a manufacturer), or they don’t “feel” right.

Soon I’ll be starting on converting an old tube Yard, (circa 1958), to a modern stereo console.  The restoration will be interesting as the Yard’s old guts go, replaced by my own designed amps, but I want it to look like it did in 1958.  I’m also adding some options which include mix-minus for the Telos, and solid state relays for the On-Air light and remote starts.

The cabinetry will be the hardest part, as well as replacing switches and knobs.  Presently I’m trying to find a source for the Gates knobs uses at that time.   Due to our economy, (or lack thereof for the past several decades), we don’t make things anymore in this country.  So it’s going to be hard to find a company to make them.  I did find someone to make the switch knobs, except he didn’t have the dye they used to make colored caps.  Only black.

VU meters?  Try to find one.  Most are unobtanium due to the complex nature of the meter.  The specifications are rather narrow, and only new old stock is available.  If you buy any of the VU meters from China, they will likely be DC meters 500mA, and even with an AC to DC conversion, the ballistics are not right.

The bottom line is, after the Gates Yard is finished, I might start on a Studioette.  It’s a classic.  But to make it, it’s going to require learning metal braking, silk screening, and other jobs which we simply don’t do here in the United States.