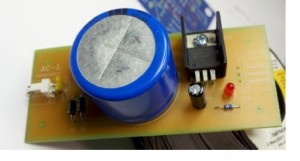 This supply was initially designed for a small headphone amplifier circuit, and LED VU meter driver, but I soon realized it had a lot more applications. As you can see it’s a very simple design using a few diodes, three capacitors, a regulator, resistor, LED, and two connectors for the transformer connection and DC out (if you choose to use connectors).

The project was designed with a slightly more expensive snap-in capacitor because I found this circuit to be very helpful not only in the headphone amplifier, but also my relay switching panel for my amateur radio antenna system, a console project I have been working on, and a switching board that I’m using in our production trailer at work.

The circuit is very simple and you might as well breadboard it, but I decided to make up PC boards so it looked professional inside equipment. After all, people judge you by results and the quality they perceive by looks, rather than how clever you can be by using a stryrofoam McDonalds hamburger box for the PCB. The corners are marked for supporting posts, which can be drilled out for (US) 4-40 or 6-32 treads. The limitation of this circuit is the capacity of the regulators to carry current. Typically, I don’t like to exceed 750 milliamps of current on these regulators for dependability.

This part list is for the 5 VOLT version. Modify as necessary for other voltages. All parts were purchased from Mouser Electronics, and can be purchased over the phone or on their web site.

I work as the Director of Engineering for TV broadcast affiliates. In my nearly 50 plus year broadcast career I have worked at recording studios, radio, and television stations. Hobbies include; collecting “oldies” from the years 1955 to 1990 that charted in the radio industry in the Whitburn/Billboard charts for Rock and C&W. I also restore old tape recordings of radio jingles, airchecks, and broadcast production music from tape and records. I also design circuits and home-brewing equipment such as audio processors, tube compressors, switcher & control systems, audio distribution amplifiers, and audio mixers. My amateur radio call sign, W8HDU, was granted via the F.C.C. vanity call-sign program, and was my grandfather’s call.
View all posts by Frederick R. Vobbe →
This entry was posted in Building and tagged 7805, 7812, 7815, 7818, 7824, DIY, LM320, LM320T, LM340, LM340T, PCB, positive, power, single, supply. Bookmark the permalink.